On the lookout for a new sewing project for kids, I came across a picture of a cute soft toy in form of a fish. After analysing the toy a little longer, I was already making my plans about sewing it myself for junior… The idea seemed great, except that actually junior’s bed is just overfilled with teddies, monster pillows and other soft toys so that he does no longer have enough space to sleep in it! So I continued with my reflexions and developed my idea some more… until I transformed the soft toy into a laundry bag in 2 sizes and a smaller one as a backpack for toddlers.

I started my project in first drawing the form of half of the fish on DIN A3 paper with a pencil. I had to correct this and that of the model like i.e. the form of the caudal fin which was a way too narrow and making it difficult to turn inside out at the end. Then I cut out the fabrics, paying attention with the bias, twice for the outer part and twice in a different tissue in the red tones for the inner part of the bag. For the smaller models, you do not need to cut out the caudal fin in the inner fabric. For the large model it is recommended to leave the fin. 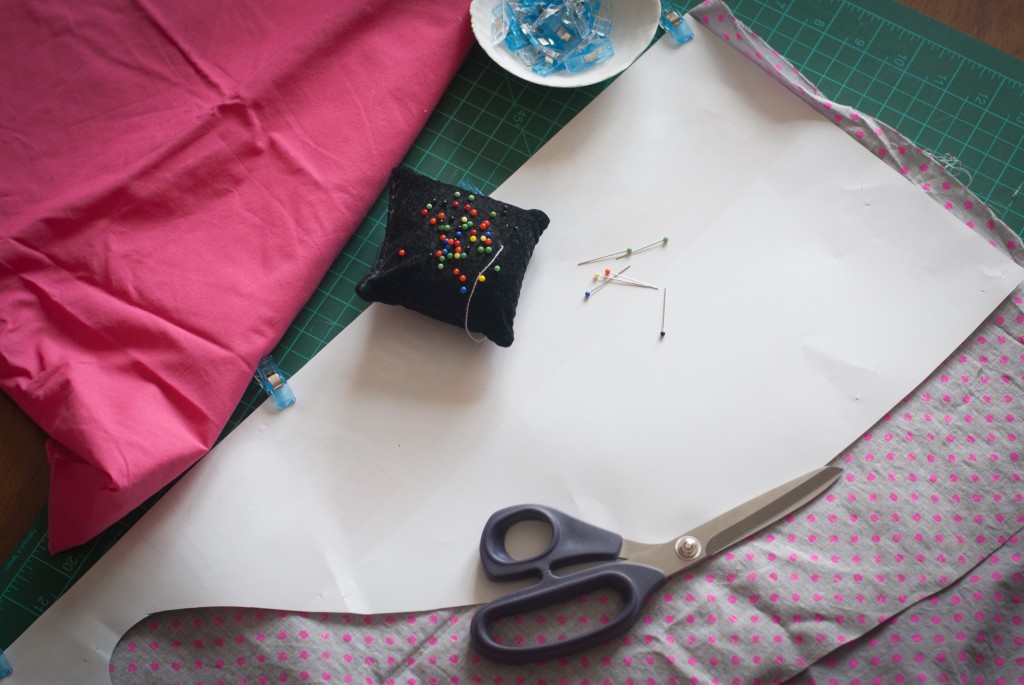 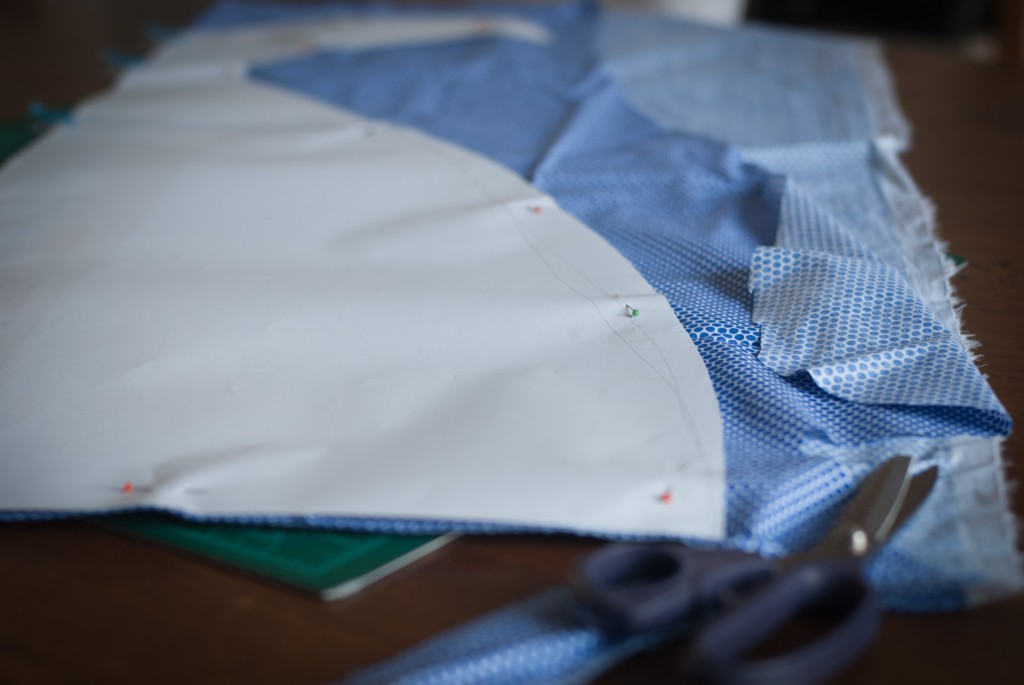 For the eyes, I chose to take some felt in white and black. It’s easier to add the eye to the outer fabric in a first step. I preferred one eye on each side placed at the same position. The black part is sewed with a simple stitch on the white part. The whole eye is then fixed with a zigzag stitch. 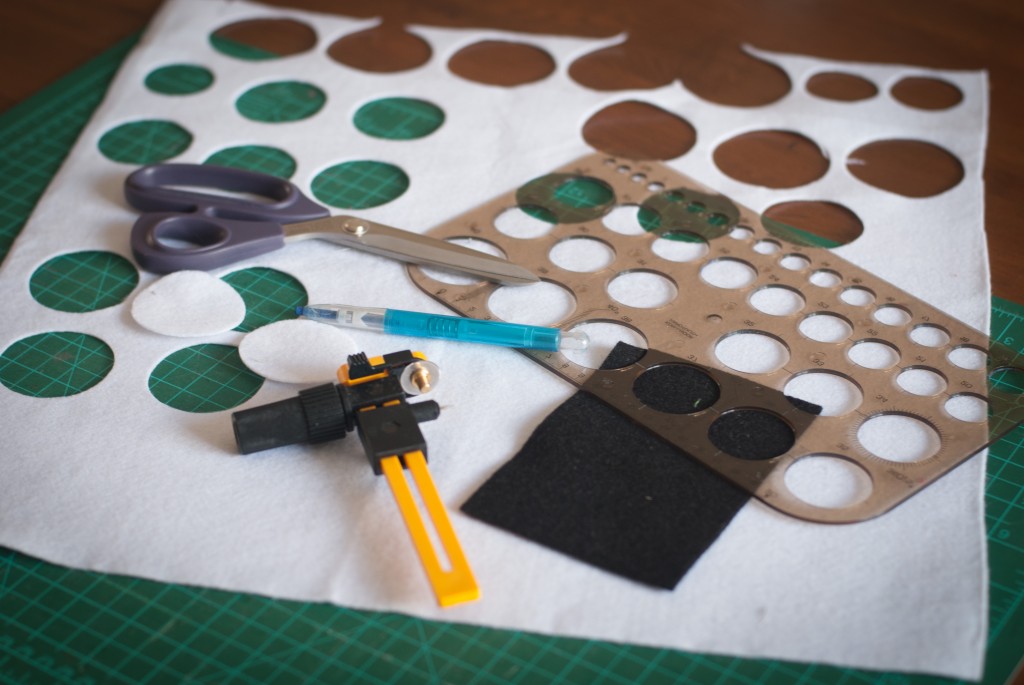 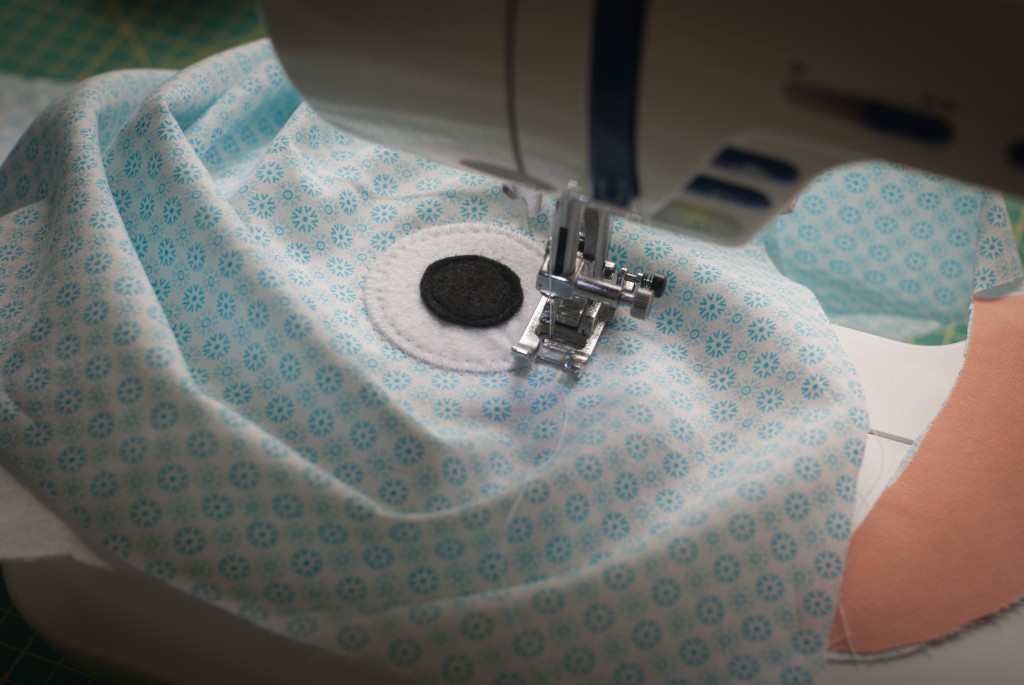 Time to lay the 2 good sides of the outer fabric on another, fix them with needles before sewing around, just leaving the straight part for the “mouth” open. Repeat this step with the inner fabric, but leaving approximately 10 cm open in the form (to turn the whole inside out at the end). You can iron the seams apart. 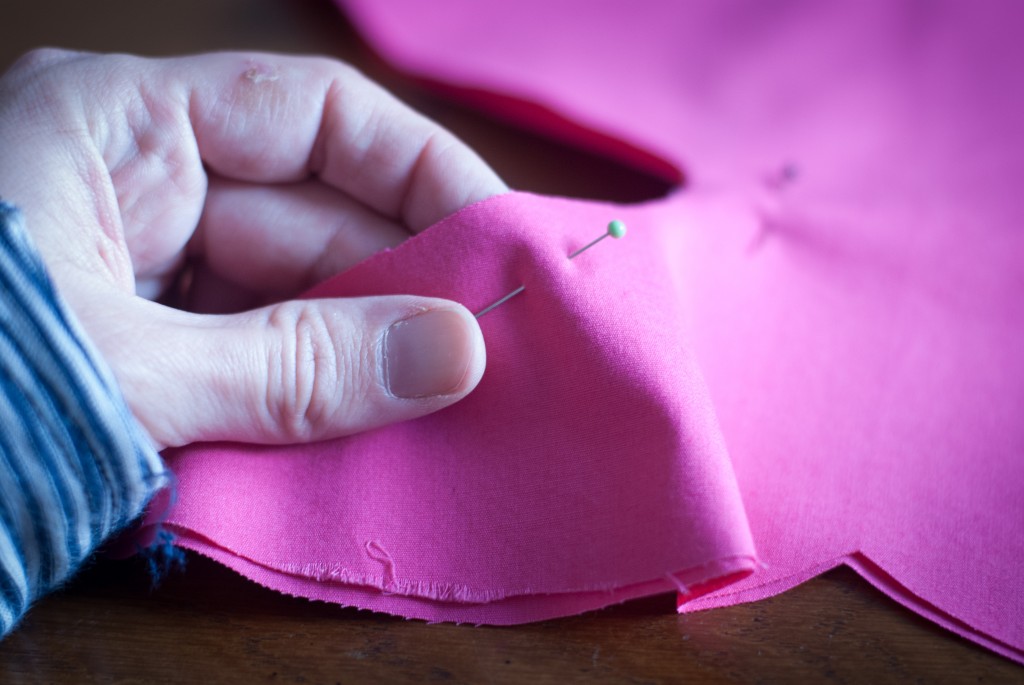 Now put the two parts right side onto right side, pin around the “mouth” before sewing it together. Before turning the bag around through the whole of the inner fabric, iron the seams apart.

To sew the tunnel for the drawstring, first turn the edges 1 cm to the outside, iron. Turn another 3 or 4 cm before ironing again and fixing the tunnel with some needles. Now you can sew around, but leave on each side 1,5 cm open. You just need to pull the cord through and your fish laundry bag is finished! 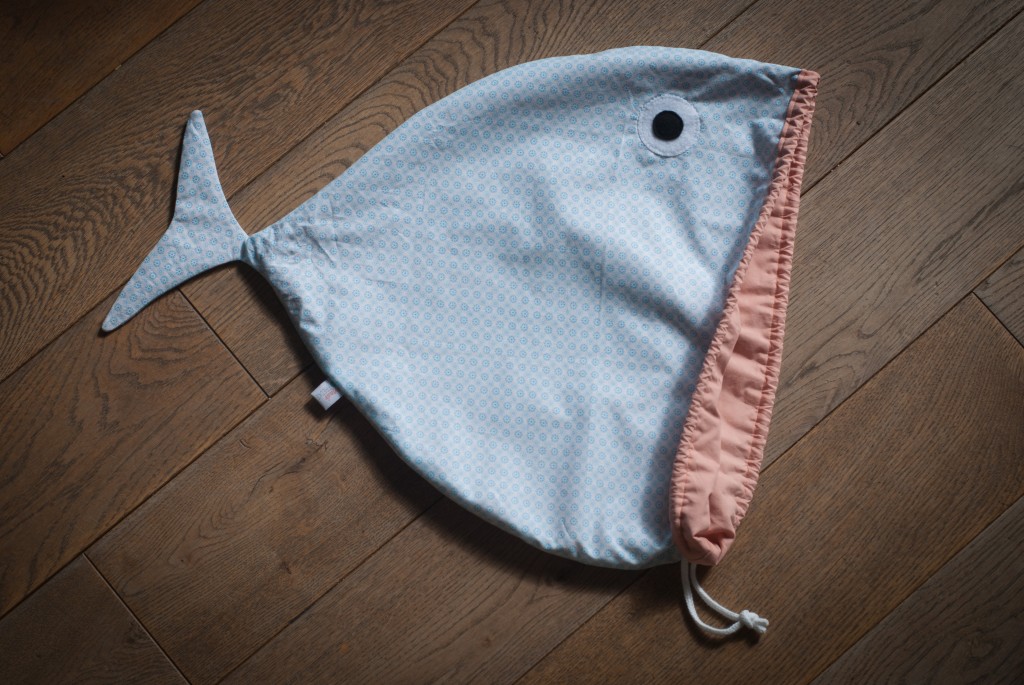 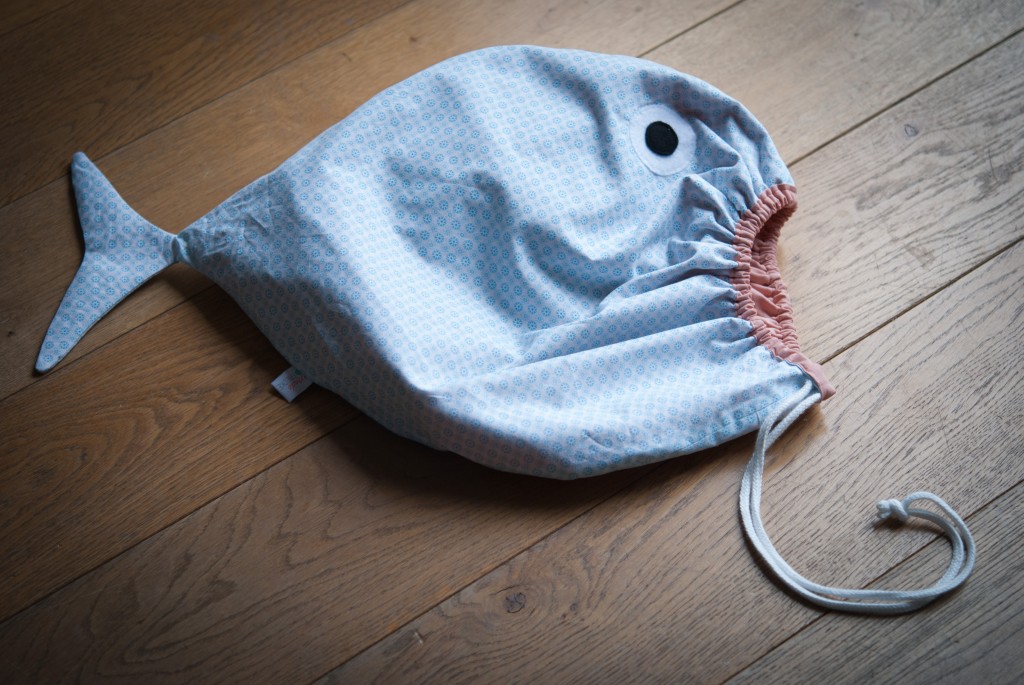 The Made by Fredke fish bags do exist in 3 sizes:

The smaller one is a backpack, ca. 30 cm large (when open) and 40 cm tall and is perfect for toddlers to carry around their stuff. 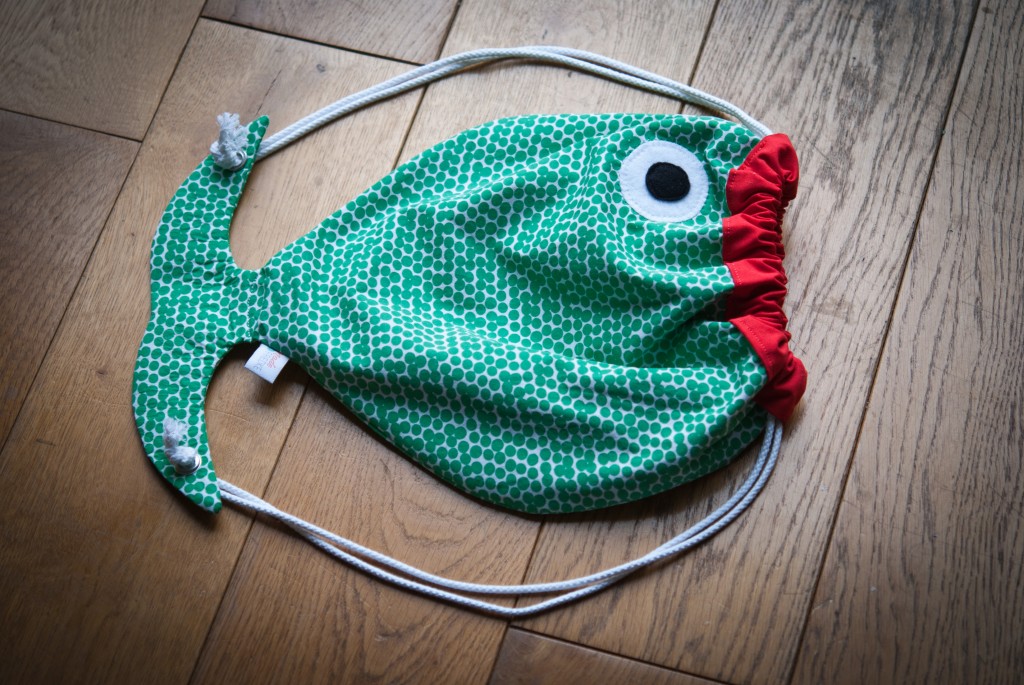 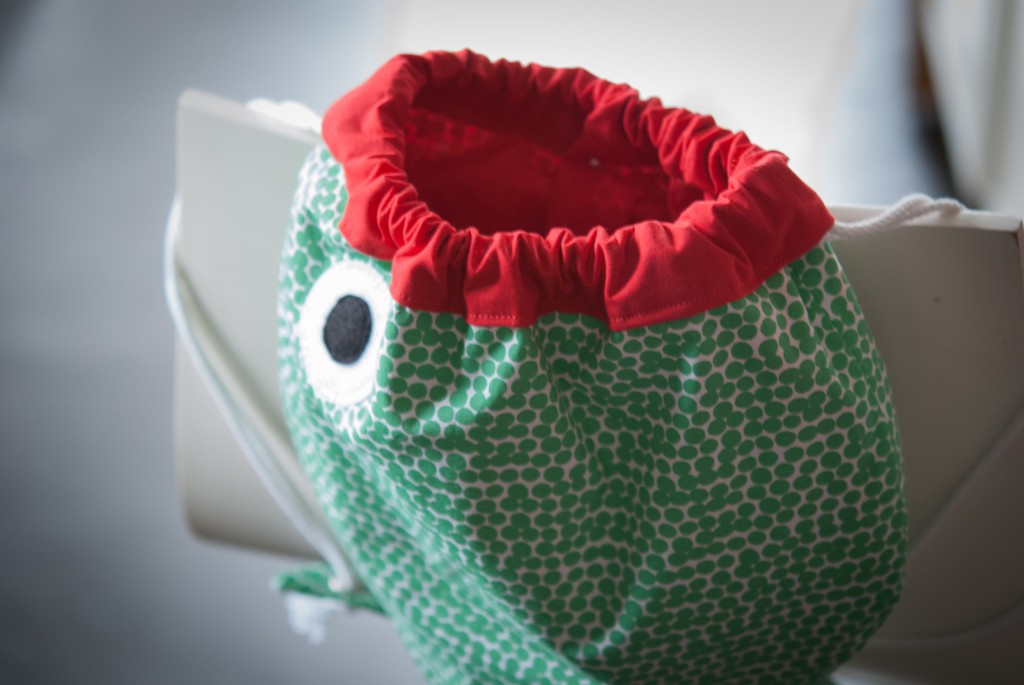 The medium bag is around 45 cm large (when mouth open) and 50 cm tall and can be used as a laundry bag when traveling, to carry around or to store the kid’s stuff. 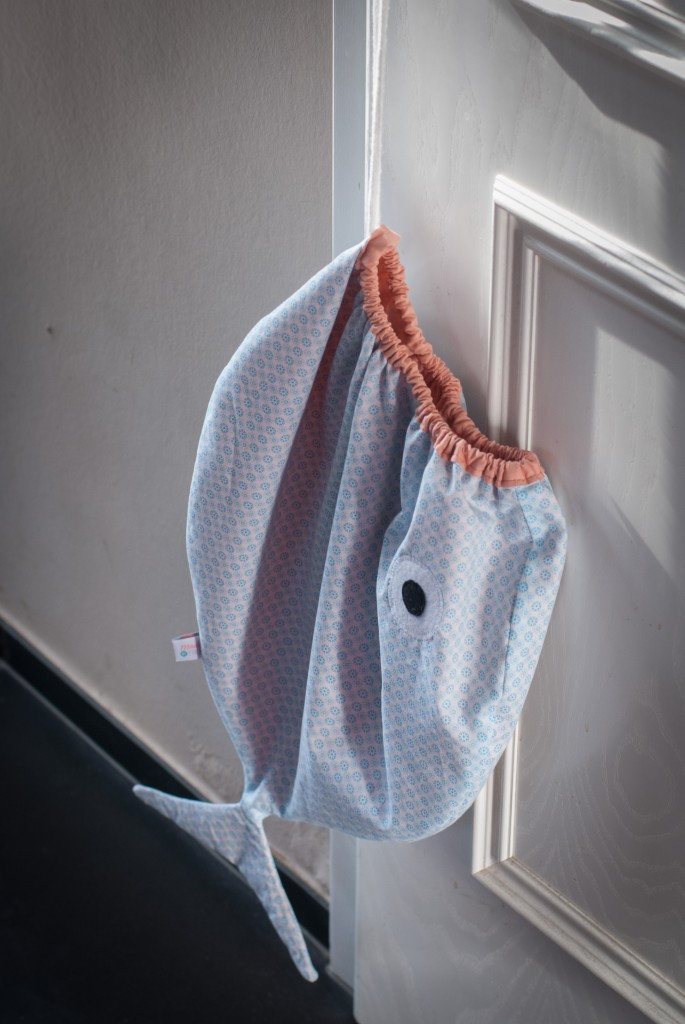 The large laundry bag measures 75 cm large (when mouth open) and 84 cm tall and does collect all the dirty laundry your kid owns! It suits perfectly on a hook either in the bedroom or in the bathroom. 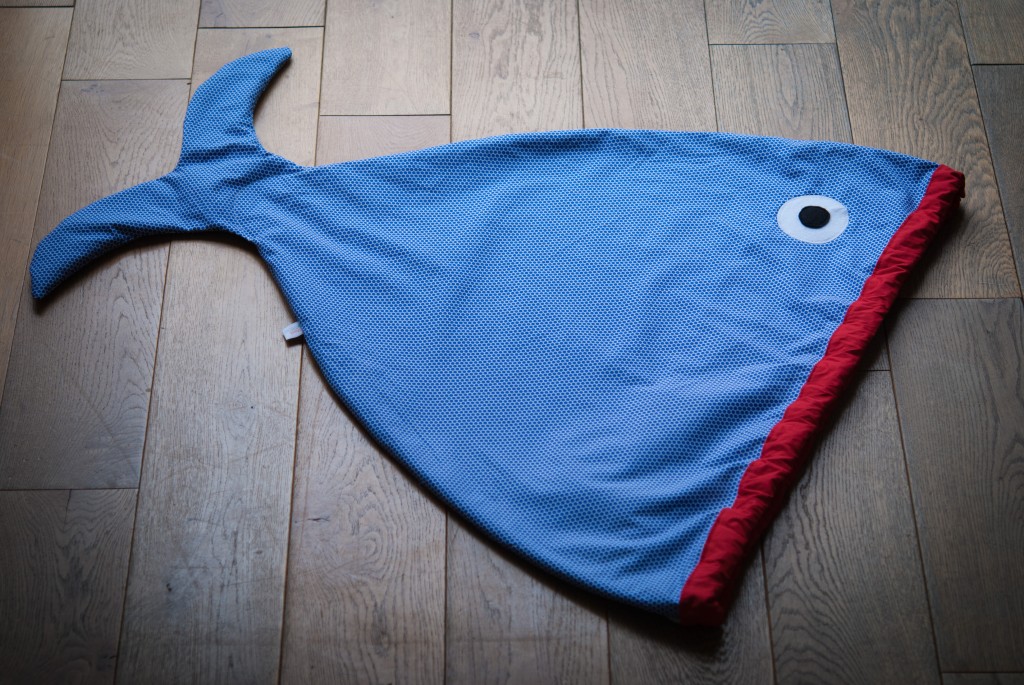 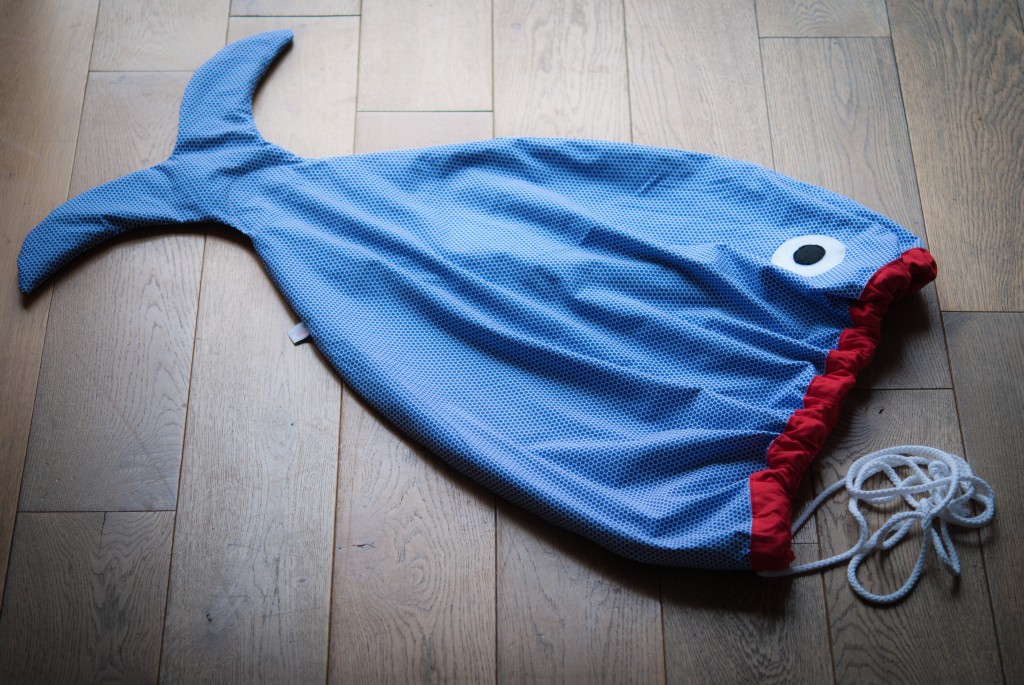 The 3 sizes are available in different colours, you just need to ask! 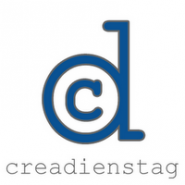 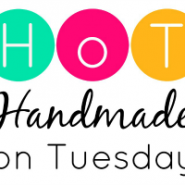 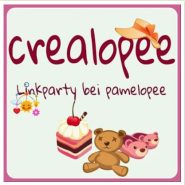